I’ve always been an avid reader of history, from ancient times through the 20th Century. I’ve also enjoyed detective novels, with Chandler’s Phillip Marlowe being a particular favorite. So I was delighted when I stumbled onto Saylor’s novel through one of my e-book recommendation newsletters.

Let’s start with the mystery. “Detective” wasn’t a recognized occupation in the first century B.C., when this series is set. Instead, the protagonist is Gordianus the Finder. who describes himself as “wretched Gordianus, explorer of dung heaps and infiltrator of hornet’s nests.”  In this novel he is hired by the orator and lawyer Cicero to find out the truth for the defense of Sextus Roscius, who is accused of arranging his own father’s murder. Obviously, Cicero is a real historical figure and this was an actual court case with a written record that has survived over the years.

TBT- Growing up in North Ridgeville

This picture, taken in 1967, was the house we lived in North Ridgeville, Ohio, from 1960 to 1972. It is on the corner of Bainbridge and Chestnut Ridge Road. 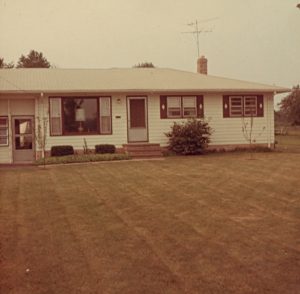 Our family moved into the new house on Labor Day weekend, 1960, along with our next-door neighbors – our two dads worked together at United Airlines, and the two new houses were built by the same contractor. Originally only the house was built, with a slab foundation laid for a garage. Later the garage was built, leaving an open breezeway. Later we enclosed the breezeway, turning it into a porch.

We moved in 1972 to a house on Boulder Drive in North Ridgeville. The family who bought it from us only moved in 2016. And our neighbors, who moved in the same time as us in 1960, still live there.

I’m just doing a throw-back Thursday to a day when it was warm this year – this was taken on July 2 – as downtown was getting fixed up for the RNC. 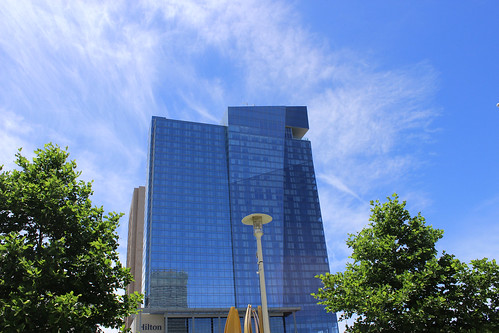 I hope I didn’t complain about the heat while walking around that day – because it’s a lot better weather than today.

Posted in Photos Tagged with: Cleveland

The new “Long Live Rock” sign in front of the Rock Hall appears to be as popular as the script Cleveland signs. On a trip there a couple of weeks ago, there was plenty of interaction with the signs, as people posed in front of it, on top of it (including a gray-haired couple) and peering through the letters. 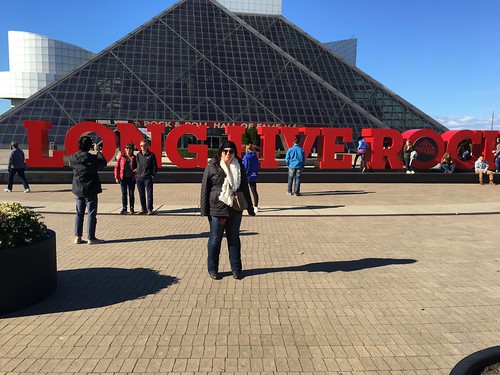 The Sleepwalkers: How Europe went to War in 1914

Beginning in 2014, there was a flurry of activity as we came up to the 100th anniversary of the start of World War I. Poised to take advantage of the interest was the 2012 book The Sleepwalkers: How Europe Went to War in 2014, by Christopher Clark, the Regius Professor of History at the University of Cambridge.

Prior to reading this book, most of my knowledge of the outbreak of World War 1 probably came from The Guns of August, Barbara Tuchman’s Pulitzer Prize winning book about the start of the war. Her book, which starts with a memorable scene of the funeral procession of King Edward VII, is mostly about the first month of the war (August 1914) with a brief part at the beginning about the diplomatic maneuvering and intrigues leading up to the war. And if I had to pick who was the focus of attention in this part of her book, I would have to say it was Kaiser Wilhelm II. 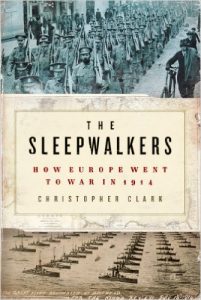 Clark’s book is different. It ends with the mobilization of armies and spends  its time with a deep dive into the history and diplomatic archives of the two countries whose dispute was the trigger point, Serbia and Austria. Just like Tuchman’s book, Clark’s book starts with a memorable scene involving the death of a monarch. In this case, it was June 11, 1903, when 28 officers of the Serbian Army invaded the royal palace in Belgrade, and shot and stabbed to death King Alexandar and Queen Draga, ending with them flinging the mutilated corpses out the window of the palace. With this as a backdrop, Clark then goes back and looks at the nationalistic tensions that developed in Serbia since its founding from a portion of the retreating Ottoman Empire. This included a multitude of plots and secret societies, all of which ultimately led up to Sarajevo in June, 1914.

While Serbia thought that it should be the leader of all the South Slavic (Yugoslav) peoples, they were thwarted by the fact that the dual monarchy of Austria-Hungary actually ruled over part of what Serbia desired (including Bosnia, Croatia, and Slovenia). So the second part of the book looks at the slow disintegration of Austria-Hungary and its amazingly complex political system that tried to tamp down ethnic tensions from the parts of the empire that weren’t Austria and Hungary.

Once the backstories of these two main players are established, he then works his way through the allies. On Serbia’s side, the Russian Empire backed them up as protectors of the Slavic people, with France allied with Russia (in what was primarily an anti-German alliance), and the slow shift of France and Great Britain to allies after centuries of being enemies. On the Austrian side was their fraternal alliance with Germany, with both empires growing out of the pieces of the Holy Roman Empire. But Russia, France, Great Britain, and Germany take up less of the book than the two instigators.

If you want to learn more about the origins of World War I, this is a suitable book. Is it the best, the most even-handed? That I don’t know, especially if you are trying to blame one side or another. or try to shift guilt away from “your side”. In my view, the author didn’t try to assign guilt. In his words, “It is concerned less with why the war happened than with how it came about.” Again from the author

The story this book tells is, by contrast, saturated with agency. The key decision-makers – kings, emperors, foreign ministers, ambassadors, military commanders and a host of lesser officials – walked towards danger in watchful, calculated steps. The outbreak of war was the culmination of chains of decisions made by political actors with conscious objectives, who were capable of a degree of self-reflection, acknowledged a range of options and formed the best judgements they could on the basis of the best information they had to hand. Nationalism, armaments, alliances and finance were all part of the story, but they can be made to carry real explanatory weight only if they can be seen to have shaped the decisions that – in combination – made war break out. (Kindle location 370).

We will be going to Friday’s game 2 – David Price versus Corey Kluber. We will be sitting very close to where I took this picture a week ago. 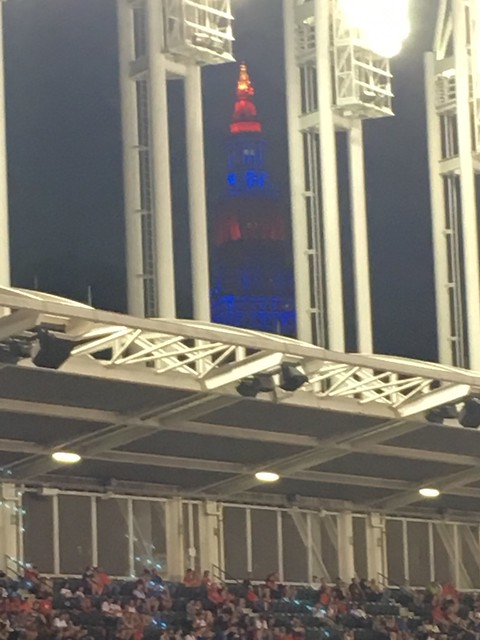 Since the game starts at 4:30, there probably won’t be a chance to get the Terminal Tower lights.

Here is the second of the new Cleveland signs. It is on Abbey Avenue, just west of the new Innerbelt bridges. If you would rather place this in relation to sources of Polish food, it is also just west of Sokolowski’s University Inn. 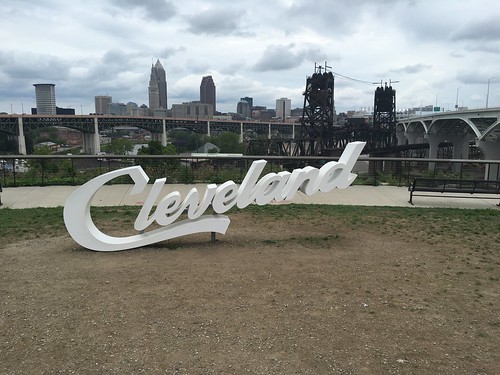 There is a brand-new parking lot across the street, if you want to stop and take a picture. They are still working on the second of the new Innerbelt bridges, but work should be done soon. They are also working on a new trail that leads down the hillside and will connect with the bike trails being built along the old canal towpath that will connect to Lake Erie.

Posted in Photos Tagged with: Cleveland

I finally went to see the new “Cleveland” sign at Edgewater Park. It is popular – I had to wait in line as a number of family groups took turns taking their picture with the sign.  To make it a little more like an old-fashioned postcard, I increased the color saturation in Photoshop – while Lake Erie was blue yesterday, it wasn’t quite that blue.

Next I need to visit the other two signs – one is in Voinovich Park just north of the Rock and Roll Hall of Fame, and the other is on the edge of Tremont, near Sokolowski’s, where it overlooks downtown.

I’m reading The Icarus Deception by Seth Godin, and came to a very interesting passage, (p 165 of the hardback edition). Paraphrasing, he says you hear about writer’s block a lot, but you never hear about talker’s block.

The reason – we never stop talking until we are sure what we are saying is perfect. We just talk “without a lot of concern for whether our inane blather will come back to haunt us.”  If you think you have writer’s block, “Just Write. Write poorly. Continue to write poorly, in public, until you can write better.”

I’m going to try to follow his advice, so there will be a lot less month-long gaps between blog posts.

NRHS Class of 76 Song of the week – Fever

The NRHS Class of 76 Song of the Week is an appearance by Southside Johnny and the Asbury Jukes on the old SCTV show (which explains the somewhat painful comedy bit at the beginning – before you get to “Fever”. You may recognize one of the backup singers – she ended up in a slightly more famous band (although why Southside Johnny never made it big is a mystery to me.)

Posted in Class of 76 reunion, rock